So as I'm relaxing and watching some wonderful Sunday night TV, I thought this would be a good time to post about my Kaylee Frye dress.

Ok, gown.  It sounds more dramatic that way.  It's like saying ship instead of boat.  It's just better.

For those who don't know, Kaylee is a character from the beyond amazing show "Firefly."  And in one highly memorable episode, she gets to trade in her greasy mechanic's jumpsuit for one of the most amazingly huge fluffy ballgowns ever to grace the screen. 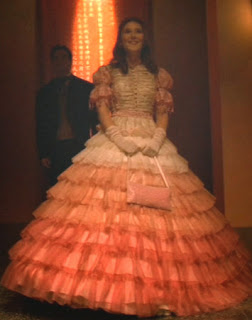 Anyway, ComicCon this year started on a Friday.  And Thursday afternoon I decided I NEEDED this dress.  I called my sister and we ran to Fabricland and bought all the tulle they had.  More or less.  And some cheap lining that looked fancier than it was.

Then we ran home and I got to work.

First thing was to pull out my ancient hoop skirt.  And it really is very old.  It went under my nana's wedding back in 1956.  It's in remarkably good shape, considering!

And it was perfect for this.  I put it on my (brand new at the time!) dressmaking dummy.  I'd only gotten it the week before.  It was massively exciting.  I gathered some lining into a big basic skirt on the machine, pinned it on, and then....it was fluff time. 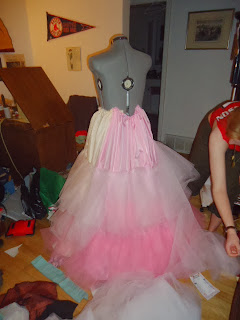 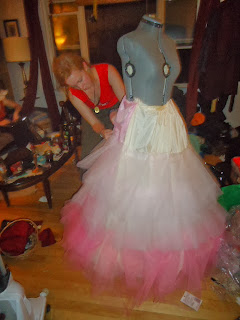 And pinning...and pinning...I tried my best to vaguely match the colour layers of the original.  But I was rushing to get it done in time for the next day and didn't fuss over it too much.  The tulle I folded in half so it was four layers thick, and thus fluffed out much nicer with much less work.  I'm a fan of doing as little work as possible.  I'm lazy like that. 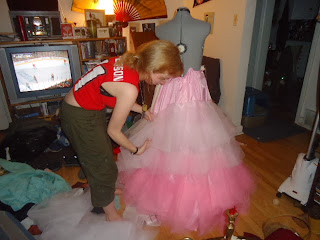 Still pinning.  I didn't do one round and then another because again with the lazy/time saving, I kept it all in one continuous line and went in circles from bottom to top.  Oh and it was NHL playoff time and the Ottawa Senators were in, so I couldn't sew without the game on.  It's a little bittersweet now seeing that I was wearing my Alfredsson shirt, since he's now abandoned our city...but I digress just a little.


Anyway this kept up for a while.  Pinning and pinning in circles until all the tulle was on and then, it was time to stitch it!  The spiral thing I'd done in pinning the fluffiness on helped hugely with the sewing as I could just keep my foot on the pedal and run one continuous line of stitching...until the bobbin ran out.  Then I got mad for a few minutes. 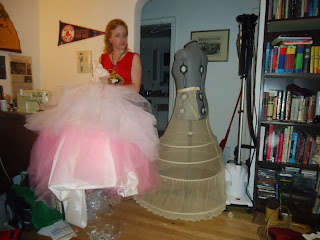 That pic gives you a good view of the hoop on the dummy.  My Nana had a 19" waist when she got married which I definitely do NOT have, so I did have to pin a piece of ribbon to each side of the waistband to tie it around me.

Man that's a lot of fluff.

Anyway, long story short (hah!  You wish!), five hours later I had a Kaylee dress to wear with pride at Ottawa ComicCon! 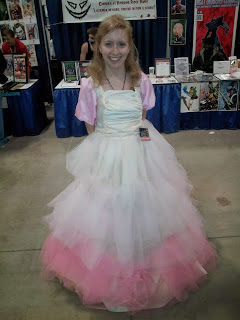 And...well...it kinda worked.  Enough that people recognized and loved it anyway!  Everyone who didn't think I was Princess Peach anyway.  But I liked that response too!


I also had two other costumes for when the dress got too much - and believe me, it definitely did after three days of Con!  I had my BSG Starbuck outfit, although sadly no pictures of that one.  I also had my Emma Swan costume from Once Upon a Time - basic and modern, no sewing, and kind of what I wear most days, but it got recognized too!  Which is why I love ComicCon.

Flash forward through months of mono and boredom, and we come to last weekend at Geek Market.  The Ottawa Geek Market this year was two days in a much bigger venue (the Carleton University Fieldhouse) compared to last year's one day small venue event.  The Dress made a comeback at the Ottawa Browncoats table, taking pictures with other members of the crew for local children's charities.  The Dress did some good!

So!  There's the magical story of the five hour dress.  Tomorrow I will be starting my Hallowe'en costume and there will be a saga about the making of that as well, whether you like it or not.
Posted by Jasmine at 19:02